Obviously, Mazer needs a maze to walk. Our program Amazing Maze Maker  builds mazes.  Run it to generate one or more mazes before using Mazer.

If Necessary, Change Mazer Blocks to Match the Maze

Stand in Front of the Maze Facing East

Mazer’s run command has one parameter, the length of the snake, which defaults to 5 blocks. Longer snakes are fun to watch because in some mazes the snake’s tail may block an opening that the snake must go through. Mazer drops blocks from the end of its tail until it can get through the opening. Life often requires some sacrifice, and so it is with Mazer.

Erase the Snake and Its Trail to Start Over

The chat command “erase” is used to erase the snake and its trail so that the maze can be used again.

A snake in a maze presents in interesting challenge because it occupies more than one space. What if the snake’s tail is blocking an opening within the maze through which the snake must pass. The algorithm implemented here drops tail blocks from the snake’s end until the opening is no longer blocked. We explored other options; e.g., making all openings two bloicks wide.

Run — the Main Control of the Program

The “run” chat command does the following:

Test If the Snake’s Head Is on Grass

Find the Door into the Maze

Search East to Find the Wall

Move the Snake to the Door

This code assumes a flat world such as that described in MakeCode for Minecraft Sandbox World: Make It Flat and Simple.

Mazer code is shared on Code Connection at this URL

To get and use the code, follow these steps.

, which is upper right in the Code Connection window just below the banner. This will open the window shown below. 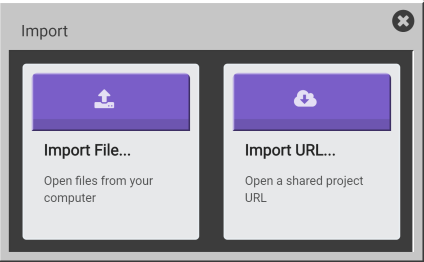 , which is on the right, to open the window shown below. 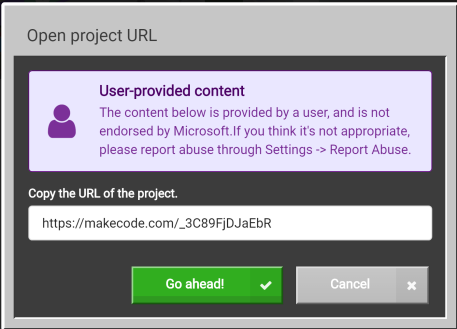 The next window you will see will be the MakeCode window with the code downloaded from the URL. At this point, you can treat it like any other code, e.g., run it, save it locally, modify it, publish your changes or whatever else your heat desires.

We have tested several other methods of downloading the code using the URL, for example, pasting the URL in a browser. No joy. For more detailed instruction see our post How to Use Shared MakeCode on Microsoft Code Connection for Minecraft.

Tic-Tac-Toe in MakeCode Arcade Blocks as Streamed on Twitch

Puzzler in MakeCode Arcade Blocks as Streamed on Twitch

Buttons and Lines as Streamed on Mixer MakeCode Channel

Code for Kaleidoscope in MakeCode Arcade

The Art of Random Lines in MakeCode Arcade